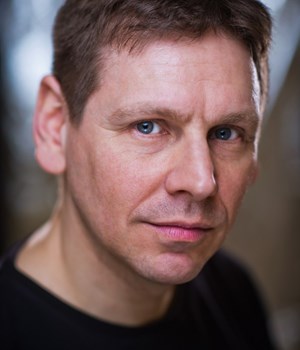 Brian’s career path has taken him from stage and screen acting, through stand-up, improv, theatre, television and film puppetry and into voice work.  He recently provided voices for multiple characters on the Netflix children’s series ‘Super Monsters’ and will soon be heard as various playable and non-playable characters in several forthcoming games for the PS5.

His work includes Spitting Image (original and 2020 revival), Space Pirates, Wizadora, The Animal Magic Show and he has been a principal performer for the internationally acclaimed Jim Henson Company on projects such as The Hoobs, Mopatop’s Shop and Construction Site.  He has performed at the Brit Awards with Scissor Sisters (twice) as well as West End and regional runs and national tours of Little Shop of Horrors, The 2012 Olympic Opening Ceremony and The Children’s BAFTA awards.

He is best known as the lead performer of the rolling droid BB-8 in the recent Star Wars sequels:  The Force Awakens, The Last Jedi and The Rise of Skywalker, as well as performing many characters throughout the series and spin off films Rogue One and Solo.  His other film work includes Hellboy 2, Dolittle, Victor Frankenstein, The Hitchhiker’s Guide to the Galaxy, Muppet’s Most Wanted Muppet Treasure Island and Prometheus.

As a writer: CBBC’s The Animal Magic Show with Dominic Wood, The Hoobs, Little Charley Bear’s Christmas Adventure, more pantomime scripts than you can wave a magic wand at and the long-running weekly satirical show ‘Newsrevue’ at London’s Canal Cafe.

Need more information or want to book Brian for your next project?
Give us a call on 020 7734 1981, email us at info@shiningvoices.com or contact us here.