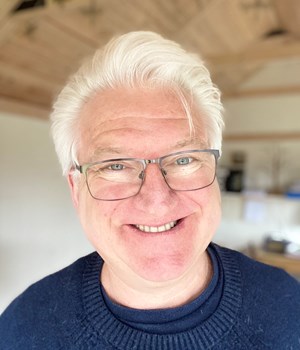 Born in the same room as Errol Flynn. Raised in the same town as Sia. Trained at the same school as Cate Blanchett. David worked in voiceover for commercial radio and the ABC in his native Australia before coming to the UK. Since moving here he has voiced for Hardy’s Wines, Fosters as well as games and corporates. He also has a side gig creating comedy films for Instagram as one half of The Tasmaniacs.

After leaving N.I.D.A in Sydney David’s first role was in ‘For the Term of His Natural Life’ opposite Patrick Macnee and Anthony Perkins.

Soon after this he left Australia to pursue his dream of working on the London stage.

To his delight and his parents’ surprise this seemed to work out and he has spent over 30 years working in theatre, film and television in the UK, Europe and America.

On stage he has done two seasons with the RSC in Stratford and London and spent a year in ‘The Woman in Black ‘at The Fortune Theatre. He recently played Helge in an acclaimed production of ‘Festen’ directed by Naomi Wirthner.

Television and film include ‘Young Indiana Jones’ for Lucas Films, ‘The Dirty Dozen III’ for MGM and ‘The Browning Version’ for Paramount Pictures.

He and his wife regularly create spoken word evenings with titles such as ‘Danny Kaye’s Chicken’ and ‘Now We Are 56.’

Need more information or want to book David for your next project?
Give us a call on 020 7734 1981, email us at info@shiningvoices.com or contact us here.