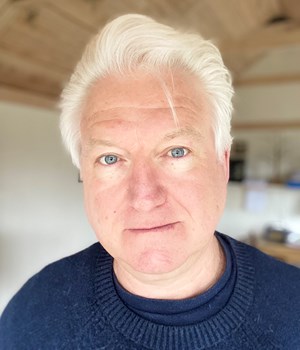 ‘Dad, can you do a guide track for me?’ David’s biggest struggle is having a son in advertising who calls on him for favours. David actually likes nothing more than putting his own skills to the test in voice overs for documentaries, corporates and commercials. He loves turning the complex into the conversational and has been heard on the BBC and Channel 4, in house at clients such as PwC and GSK and commercially for Specsavers, Classic FM and McDonalds.

David has spent over 30 years working on stage, film and television in the UK, Europe and America.

On stage he has done two seasons with the RSC in Stratford and London and spent a year in ‘The Woman in Black ‘at The Fortune Theatre. He recently played Helge in an acclaimed production of ‘Festen’ directed by Naomi Wirthner.

Television and film include ‘Young Indiana Jones’ for Lucas Films, ‘The Dirty Dozen III’ for MGM and ‘The Browning Version’ for Paramount Pictures.

He and his wife regularly create spoken word evenings with titles such as ‘Danny Kaye’s Chicken’ and ‘Now We Are 56.’ He also runs a storytelling business The Story Spotters which operates around the globe with multi-national corporate clients.

Need more information or want to book David for your next project?
Give us a call on 020 7734 1981, email us at info@shiningvoices.com or contact us here.