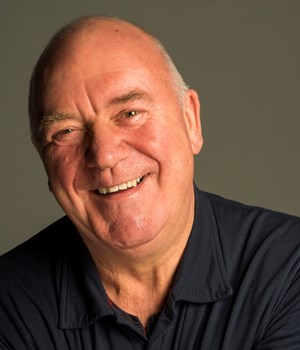 Harry trained as a teacher of Drama and English at Goldsmiths’ College, His acting career began at the old Albany Empire in Creek Road, which he also helped to build. Voice over credits include a recent podcast titled Stealing Victory about the theft of the World Cup trophy in 1966 where Harry played, amongst others, a 1960's London policeman.

Harry has divided his time between mainstream theatre and television. Notable theatre roles include First Citizen in Coriolanus at the Young Vic and Boult in Pericles (Olivier award for best revival) for the RSC. West End appearances include Captain Horster in Arthur Miller’s adaptation of Ibsen’s An Enemy of the People at the Playhouse and Louis in A View from the Bridge at the Strand Theatre, also by Arthur Miller.

Other theatre credits include a critically acclaimed performance as Uncle Harvey in Alan Ayckbourne’s Season’s Greetings. Harry also played Oscar in Simon Block’s dark comedy Not a Game for Boys.

More recently,Harry has taken to writing for young people and has now had two productions staged at the Billericay Academy, Essex. He is currently working on more work for young people and is also developing a TV version of his first youth play about boy soldiers in WW1.

Need more information or want to book Harry for your next project?
Give us a call on 020 7734 1981, email us at info@shiningvoices.com or contact us here.