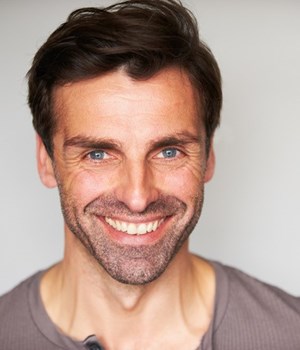 Jonathan has extensive experience as an actor on stage and television. His voice work spans radio drama, documentary, and TV promos and idents. Jonathan recently returned to Emmerdale to reprise his role as the flawed and controversial, Pierce Harris who first appeared on screens in 2017.

He voiced multiple series of Ax Men for Sky History, and various other documentaries also for Sky. He has featured in Radio dramas for BBC Radio 4.

Jonathan trained at the Royal Academy of Dramatic Art and has appeared on West End stages and theatres up and down the UK. Credits include The Picture of Dorian Gray which opened in London and continued on a national UK tour, Desperately Seeking Susan in London and the touring production of When Harry Met Sally.

Some of Jonathan’s notable TV appearances include Jo, starring Jean Reno, Bones for Fox and the BBCs Silent Witness, Holby City and Waterloo Road.  He has also appeared in A Touch of Frost, Clocking Off, Bob and Rose and Fat Friends.  Jonathan played Joe Carter in Coronation Street for ITV.

Jonathan is a skilled sight-reader and has a natural engaging delivery.

Need more information or want to book Jonathan for your next project?
Give us a call on 020 7734 1981, email us at info@shiningvoices.com or contact us here.