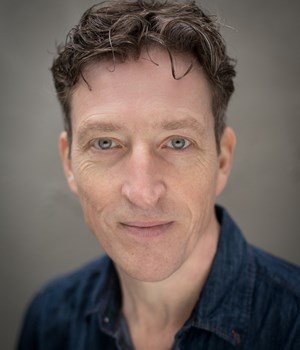 Roger has been a professional actor since 1991. As a voice actor he has recorded over 100 radio plays and short stories for the BBC. He is an award-winning reader of many audiobooks and contributes frequently to the world of computer games, most recently in Greedfall and Assassins Creed Valhalla. Animation work includes Peter Rabbit and Sarah and Duck. He also does a lot of corporate, ADR and educational voice work, both in English and in French (in which he is fluent, having been born and brought up in Belgium).

On stage, Roger has worked in many theatres in the country, including seasons with the Royal Shakespeare Company, Chichester, Southampton, Exeter and Harrogate. He played ‘Daddy’ (My Daddy) in The Railway Children at London Waterloo, The Pitmen Painters at the New Vic and, most recently, as Father Christmas in The Snow Queen in Kingston. He has also twice toured the U.S with Shakespeare plays - as well as directing A Midsummer Night’s Dream in Wyoming.

On screen, Roger has appeared in, among others, The Hour, Victoria, Doctors, MI High and Casualty. He is a returning character in Father Brown (playing Canon Fox) and was in the latest series of The Crown.

Need more information or want to book Roger for your next project?
Give us a call on 020 7734 1981, email us at info@shiningvoices.com or contact us here.